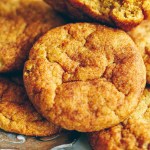 Soft, fluffy, and oh so delicious vegan Pumpkin Snickerdoodles. These cookies are the perfect introduction to fall and pair well with a warm coffee or beverage.