With Easter right around the corner, why not put a spin on the classic cinnamon rolls and make cinnamon roll muffins for brunch instead? These muffins are so soft and moist and swirled with gooey cinnamon sugar bits.

They have nutty notes from almond flour, caramely flavor from coconut sugar, and perfect hints of cinnamon.

These are also healthier than your average dessert, gluten-free, and of course vegan.

These Cinnamon Roll Muffins are… 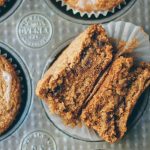