A dense and fluffy pecan banana bread cake topped with a creamy maple yogurt frosting. A perfect recipe for you to use up your ripe bananas that isn’t traditional banana bread.

This recipe was actually a happy accident.

I intended on making banana bread scones, but the batter came out too wet and I was unable to form a dough. I didn’t want to keep adding flour, as it would alter the texture so I resorted to transferring it to a baking dish. And then…the banana bread cake was made.

This recipe came out way better than I anticipated, as I wasn’t looking to make a cake when I first when into it. The texture is perfectly dense and fluffy and pairs perfectly with the creamy, tangy maple yogurt icing.

This is the perfect baked good to pair alongside your morning cup of coffee or tea. It’s even better when warmed up in the microwave for about 15 seconds.

Since this is a cake I would guess it could be made into cupcakes/muffins as well. I haven’t tried baking them in cupcake tins, but if you give it a go let me know how they turn out! It would be delicious either way.

This cake has the perfect texture thanks to a few simple ingredients:

Ripe bananas: Want a dense and moist texture in your baked good? Add ripe bananas. They add natural sweetness and moisture to the finished product. Best of both worlds.

Maple syrup: Originally, I was going to add coconut sugar as the main sweetener in this recipe. However, to add more moisture I opted for maple syrup. It also adds a delicious maple flavor which pairs with the maple yogurt frosting.

Flax egg: With just 1 tbsp of flax seed meal and 2 tbsp of water you will have the perfect egg replacement. Bonus? Adds a boost of fiber and omega-3’s.

Melted coconut oil: Adding a fat component to your baked good will always yield a richer flavor and moisture texture. Refined coconut oil will be your best bet in this recipe if you don’t want a coconuty flavor in your cake.

Almond + tapioca flour: I haven’t done much experimenting with this gluten-free flour combination until this recipe. It yields a denser texture compared to a combination of almond and oat flour, which I do enjoy. This texture is just right for this banana bread cake.

This Pecan Banana Bread Cake is… 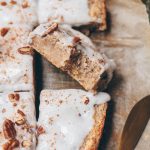 A dense and fluffy pecan banana bread cake topped with a creamy maple yogurt frosting. A perfect recipe for you to use up your ripe bananas that isn't traditional banana bread.