I was sent a couple packages of Impossible Foods beyond beef a few days ago and I was so excited to get into the kitchen and start cooking up a recipe. I first tried Impossible Foods a year ago and was blown away with how similarly it tastes to meat. Now, that isn’t everyones forte, but it sure makes for some delicious vegan, meaty dishes.

This post isn’t sponsored by Impossible Foods I just am so impressed with their product and need to share. If you are turned off by the taste of meat, you can definitely substitute or omit it. I’ll list some possible substitutions later in this post.

If you want a vegan dish that will win over a non-vegan, this is definitely the one. It is so savory, cheesy, and meaty. It doesn’t taste like straight up cashew cheese and there isn’t the weird aftertaste of vegan meat.

The cheese sauce is made up of 6 simple ingredients: cashews, carrots, nutritional yeast, miso paste, non-dairy milk, and salt.

The cashews are soaked in boiling water, and the carrots are boiled simultaneously in the boiling pasta water. They are both added to a high-powered blender along with the rest of the cheese sauce ingredients. It is then blended until smooth and oh so creamy.

First, a chili base is prepared by sautéing red onion, garlic, and green red bell pepper in a bit of oil until soft. Then Beyond Meats ground meat is crumbled throughout along with tomato paste, cumin, smoked paprika, coriander, salt and pepper. The mixture is cooked until meat starts to brown and spices are fragrant.

Then comes the kidney beans and diced tomatoes. The mixture is brought to a low simmer and cooked until flavors mend together.

After the pasta has cooked and cheese sauce is prepared, the pasta is added to the chili pot and in goes the creamy cashew cheese.

If you would like to substitute the vegan meat I recommend:

This Vegan Chili Mac and Cheese is… 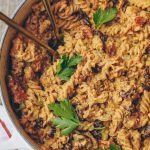 A savory and creamy chili mac n cheese that is ultra cheesy and meaty without the meat or cheese. This vegan chili mac and cheese is simple and easy to make and will win any vegan or non-vegan over.