You’d probably never guess by the looks and taste of these blondies that they had a can of chickpeas in them. Trust me, even being the one who made them I was surprised with the lack of beany taste.

The chickpeas add a perfectly dense and soft texture and high protein component to these blondies. I mean who wouldn’t want a dessert that is also somewhat healthy for you? But who are we kidding, any dessert can be eaten in moderation.

These chickpea blondies contain simple ingredients, and are extremely simple and quick to make.

These were started off by combining rinsed and drained chickpeas, almond butter, tahini, maple syrup, and vanilla extract in a high-speed blender. Ingredients were blended until a smooth and thick paste formed. Batter was then transferred to a large mixing bowl.

To the mixing bowl, the almond flour, coconut sugar, baking powder and soda, and salt were mixed in until a cookie dough formed. Chocolate chunks were then folded into the dough.

Cookie dough was then transferred to a lined loaf tin and spread in an even layer. Blondies were baked for 20-22 minutes until top was firm to touch and light golden brown.

Important: Blondies must be cooled for at least 10 minutes before cutting into 6 even squares.

If you don’t have all ingredients on hand here are some simple substitutions:

Almond butter -> other nut butter, such as peanut, cashew, or sunbutter.

Tahini -> other nut butter as mentioned above.

Maple syrup -> other liquid sweetener, such as honey, agave, or brown rice syrup.

Chocolate chunks -> other add-ins, such as chopped pecans, walnuts, and/or pumpkin seeds.

These Chocolate Chip Chickpea Blondies are… 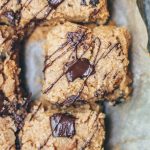