These soft, pillowy cinnamon roll cookies will surely be your new obsession. They are swirled with cinnamon sugar and drizzled with a simple icing. Can’t get better than that.

Obsessed is an understatement. These cookies are too good I wouldn’t be surprised if my family eats the whole plate overnight. Round two?

These cinnamon roll cookies have the perfect texture. They are soft, pillowy, and moist. They have hints of cinnamon sugar swirled throughout and of course drizzled with a traditional powdered sugar icing.

I hope you love these cookies as much as I do…

Here is a run down:

First, the sugars and butter are creamed together until smooth. Then applesauce and vanilla extract are added. Flour, baking soda, cream of tartar, and salt are mixed in until a soft dough forms.

The dough is formed into a smooth ball then flattened into a square on a piece of parchment paper. Using a rolling pin, it is rolled out into a large rectangle.

To create the cinnamon sugar filling, melted butter, coconut sugar, and cinnamon are combined to form a smooth paste. It is then spread in an even layer in the center of the dough. Taking the edges of the parchment paper to prevent sticking, the dough rectangle is rolled into a tight log then cut into 1-inch portions.

The portions are rolled into balls then lined on a baking sheet. They are baked for 15 minutes, cooled for 5 minutes on the baking sheet, then transferred to a wire cooling rack.

There are a few ingredients I want to highlight in this recipe that makes these cookies so darn good.

Cane sugar + coconut sugar: I’ve said this before, but I love the combination of coconut and cane sugar in baked goods. Coconut adds a delicious caramely taste and cane sugar adds moisture and of course sweetness!

Applesauce: Not a typical ingredient in cookies, but it replaces eggs in the recipe and adds extra moisture.

Vegan Butter: Can’t have a good cookie without some fat. When the sugar is creamed with the butter it adds chewiness and moisture to the cookie. We all want that right? 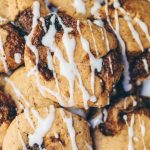 These soft, pillowy cinnamon roll cookies will surely be your new obsession. They are swirled with cinnamon sugar and drizzled with a simple icing.