The fudgiest, gooey gluten-free brownies you’ll ever taste. Also, embedded with chunks of pecans and topped with a simple almond butter caramel. This recipe is ultra rich and will definitely leave you wanting the whole batch.

You ever make a recipe that you think will turn out fantastic, but then open the oven and an instant disappointment covers your face? Surprisingly, that was the case for these brownies. I opened the oven and had a feeling these brownies were going to have a spongy texture, way too underdone, and the caramel would be burnt on top. Well, man was I wrong.

I made the last minute decision to sprinkle on some extra chopped pecans and chocolate chips right as they came out of the oven. I let the brownies cool for 10 minutes and viola – the absolute perfect brownie I have ever had. Trust me, not lying on that statement.

Let’s talk about this caramel: It isn’t your traditional vegan coconut milk caramel and it also happens to be refined sugar-free

All the ingredients, except vanilla, are combined in a small saucepan over medium heat. The caramel is then brought to a lower simmer and then cooked for 1-2 minutes until thick and syrupy. You’ll then take it off the heat and whisk in the vanilla. In my opinion, this caramel is a lot more flavorful and rich then a coconut milk-based one.

Let me give you a run down on what makes these brownies so dang delicious:

Flax eggs: I’ve discussed the benefit of using two flax eggs instead of one in a previous recipe but it really makes a huge difference to the texture of your baked good, especially when it’s gluten free. It adds more moisture to the product, yielding a more fudgy gooey texture, while still holding the product together.

These Fudgy Caramel Pecan Brownies are… 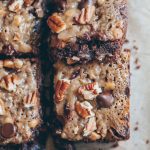 The fudgiest, gooey gluten-free brownies you'll ever taste. Also, embedded with chunks of pecans and topped with a simple almond butter caramel.