No-bake s’mores bar with a nutty graham-cracker like base, chocolate center, and “marshmallow fluff” topping. These bars are the perfect healthier summer indulgence.

My favorite activity in the summer has to be roasting marshmallows over an open fire…even better when you’re in the middle of the woods camping. Stuff that between two toasted graham crackers and a melty square of dark chocolate and you have yourself the perfect summer time dessert.

The marshmallow fluff topping is all thanks to chickpea liquid or aquafaba. I’m sure you’ve heard of this magical liquid somewhere, as it’s common in vegan macarons, meringue, and fluffy cakes. So, who says you can’t make it into marshmallow fluff?

How does aquafaba impart egg white-like characteristics exactly? The liquid that sits in a can of chickpeas is high in protein and starch. Therefore, it has the ability to trap air and form structures or stiff peaks.

I assure you that this marshmallow fluff does not taste like chickpeas. That’s why maple syrup, and vanilla extract are added. Also, a pinch of cream of tartar to aid in structure.

The base consists of: oats, almonds, blackstrap molasses to impart a graham cracker-like taste, maple syrup, vanilla, dates, and salt.

Layered on top of the base is dark chocolate with a bit of coconut oil that is a cheat to temper the chocolate (AKA allow it to harden).

Then comes the fluffy pile of aquafaba marshmallow fluff.

Since we won’t be toasting the marshmallows, you can sprinkle on a bit of coconut sugar that will resemble a toasty golden color.

If you don’t have all the ingredients on hand here are some simple substitutions:

These No-Bake S’mores bars are… 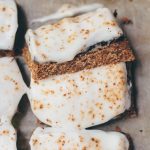 No-bake s'mores bar with a nutty graham-cracker like base, chocolate center, and "marshmallow fluff" topping. These bars are the perfect healthier summer indulgence.