I can’t get enough of these cupcakes. This recipe makes me question why I don’t make cupcakes more often. Quite honestly, it’s because I am not a huge fan of cake. Nothing about it excites me and the frosting is never how I want it to taste like.

These cupcakes prove my past tastebuds wrong.

These cupcakes are soft and moist in texture, filled with warming spices, and smothered in a rich and creamy cinnamon buttercream.

I mean…can you really go wrong at this point?

Baking is a science, so there is always a reason why there are particular ingredients in a recipe. So, I am going to break this recipe down a little.

Brown sugar: Brown sugar adds moisture and color to the baked good. This sugar contains molasses which is highly hygroscopic, meaning it contains a high moisture content. Brown sugar in this recipe will yield a moist cupcake, so don’t skip this!

Cane sugar: Cane sugar doesn’t add as much moisture as brown sugar does, but it does add color to the cupcake and sweetness.

Applesauce: Plant-based goods tend to be on the dryer side. So adding high-moisture ingredients is critical. Instead of oil or eggs these cupcakes contain applesauce!

Apple Cider: Of course, it wouldn’t be an apple cider cupcake without apple cider. This will add a delicious flavor to your baked good and as I’ve said several times…moisture!

These Vegan Apple Cider Cupcakes are… 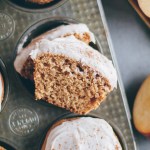