This may be the best vegan carrot cake there is. It is perfectly moist, fluffy, and embedded with chunks of walnuts and carrots. It is perfectly sweet and spiced with cinnamon and nutmeg. Then smothered in a creamy vegan cream cheese frosting.

I asked on Instagram the other day what recipes you would all like to see. I got an overwhelming amount of responses requesting carrot cake…and I am not surprised. Carrot cake seems to be a really popular dessert recently, but also it’s just so good.

I was hesitant on making another recipe since I already have one on my site. However, that recipe is a bit dated and I knew with a few tweaks it would be even more delicious.

This carrot cake is all you could have ever dreamed of. It’s dense and moist, but perfectly fluffy. It’s sweet, but not too sweet. And it’s spiced with cinnamon and ginger, but it’s not too spicy. Let’s just say it’s really well rounded.

What makes this cake so fluffy and moist? Let’s break down some of the ingredients:

Cane sugar + coconut sugar: The combination of cane and coconut sugar makes for a perfectly sweet baked good. It is not too overpowering, but it also cures that sweet tooth. The caramely notes from coconut sugar also adds a delicious taste to the cake.

Melted coconut oil: We want this cake to be moist, so it is essential you add a bit of oil. Personally, I am a huge fan of melted coconut oil in baked goods. It adds the perfect amount of moisture without being too heavy.

Walnuts: Personally, I could not enjoy a carrot cake without chunks of walnuts. Adds a delicious nutty flavor and crunchy texture.

This Vegan Carrot Cake with Cream Cheese Frosting is… 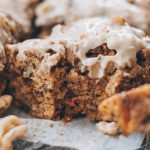 This may be the best vegan carrot cake there is. It is perfectly moist, fluffy, and embedded with chunks of walnuts and carrots. It is perfectly sweet and spiced with cinnamon and nutmeg. Then smothered in a creamy vegan cream cheese frosting.