Perfectly fluffy, and moist blondies studded with soft chunks of apple, rich notes of peanut butter, and drizzled in a creamy coconut-based caramel.

While developing this recipe I thought it was very appropriate for fall season, but how could you resist devouring these now? I don’t know about you but I think any dessert can be enjoyed anytime of the year. Pumpkin pie though…that’s up for debate.

These blondies are comforting, warm, and oh so delicious. With notes of cinnamon, creamy peanut butter, soft chunks of apple, and finished off with a creamy coconut-based caramel.

Don’t tell me you’re not drooling.

The first test of this recipe was far from perfect. I intended to make these blondies gluten-free with a mix of almond and oat flour. However, they fell apart even after waiting 10 minutes for them to cool. They were too moist and soft. Let’s just say test one was a fail.

I decided to scrap the gluten-free variation and do a mixture of whole wheat and white wheat flour. Texture is perfectly soft, fluffy, and moist without falling apart. The taste is perfectly sweetened with coconut sugar and maple syrup and spiced with a bit of cinnamon.

These blondies are made by whisking together a flax egg, creamy peanut butter, non-dairy milk, maple syrup, and vanilla extract until creamy. Then the flours, coconut sugar, baking powder, and salt are added. The batter is then stirred together until a thick batter forms.

Chopped apples and pecans are folded in. The batter is then poured into a parchment lined 8×8 baking dish. The blondies are baked at 350f for 45 minutes until a toothpick inserted comes out clean.

While blondies are baking, the caramel sauce can be prepared. Canned full-fat coconut milk and coconut sugar are added to a small saucepan. Once the mixture comes to a low boil, the heat is reduced to medium and simmered for 8-10 minutes until thick and sauce coats the back of a spoon. Flaky sea salt is added. Caramel sauce is cooled until thickened a bit more.

Blondies are cooled for 10 minutes before cut and drizzled with caramel sauce.

I haven’t tried substituting any ingredients in this recipe, however you’re welcome to experiment yourself.

Maple syrup can be substituted for other liquid sweeteners, such as honey, brown rice syrup, or agave.

Peanut butter can be substituted for other nut butters, such as almond, cashew, or sunbutter.

Pecans can be substituted for other nuts, such as walnuts or almonds. 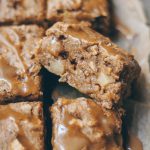 Perfectly fluffy, and moist blondies studded with soft chunks of apple, rich notes of peanut butter, and drizzled in a creamy coconut-based caramel.