Fudgy, melt-in-your-mouth almond brownies. Studded with sliced almonds and made with almond flour. They are gluten-free, grain-free, and of course vegan.

I assure you these brownies won’t disappoint. With a super fudgy and moist texture and perfect crunch from the almonds, it is the ultimate topping on your ice cream or to be eaten by itself.

They are super easy to make and contain simple, healthier ingredients, such as almond flour, almond butter and coconut oil.

Spice these bad boys up with 1/2 tsp of instant espresso powder and you’ll thank me later.

These Fudgy Almond Brownies are… 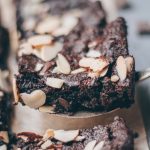 Fudgy, melt-in-your-mouth almond brownies. Studded with sliced almonds and made with almond flour. They are also gluten-free, grain-free, and of course vegan.

*you shouldn’t have to microwave your coconut oil, if you let it sit out at room temp. to achieve a softer consistency